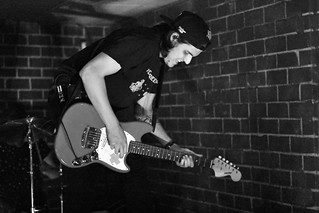 Despite having a brother who lives on Ohio State’s campus, I had never been to the Donato’s Basement on High Street until last Sunday’s Tuned Up show with Benji, Sleeptalk, DBMK, and Colly. I wasn’t expecting, then, how packed it would easily become throughout the night as excitement built with each new performer.

The show opened with Saud Ahmed, an unexpected solo guitarist who managed to simultaneously play a kick drum with one foot, a tambourine with another, and his guitar. Although his music wasn’t what I would’ve imagined to open for these fast-paced bands, the crowd seemed to enjoy it – especially when he sang a love song to his girlfriend.

An hour before this show, I learned that a friend was playing keyboard as part of Benji. I’d never seen the group, and despite only having a guitar and a keyboard, their indie songs were surprisingly catchy. It was difficult to focus because I kept getting distracted by their groovy harmonies. Both Ben and Jack interacted with the crowd between tunes, encouraging engagement while simultaneously calling out two overly enthusiastic friends in the front row. It definitely kept the audience’s attention focused on the stage, that’s all I have to say.

Alternative rock band Sleeptalk, hailing from Los Angeles, may have been my favorite band of the night. A new friend, met in the audience because of a mutual excitement for this band and a mutual love for photography, talked my ear off until the set began. I’m pretty sure his enthusiasm was catching, but it definitely wasn’t just me – the whole crowd was captivated, twisting and bouncing with each new song.

On the drive home, I was having trouble not thinking about this set in particular. It didn’t seem like anything extraordinary at the time, but I was struck by both their music and their defiantly bold attitude, and I haven’t stopped listening to their Spotify since.

Although the frontman of DBMK kept pronouncing “Donato’s” wrong, their set was easily the coolest. I must admit, I got uneasy when they unscrewed the light bulbs from the ceiling, but they had these huge color-changing pillars that lit up and cast an almost eerie glow on the whole stage.

Each track was as colorful as the pillars themselves, and the colors chosen worked so well with the already-vibrant music that it added an oddly satisfying layer to the intense show. Their mutual excitement translated well onstage, coming out in nearly-overwhelming bursts where members of the band jumped into the audience or off of the drum kit.

As Colly came on and the clock ticked closer to my unfortunately early curfew, I was determined to enjoy every minute I had left. Again, they unscrewed the lights, but this time played in almost total darkness – while great for intimacy, it was not the best as a photographer. But, of course, I was quick to forget about that as the show started. Besides infectious energy, the band’s upbeat alternative rock was easy to groove with.

By that point, the crowd had thinned out a considerable amount, but it didn’t faze the band – they seemed to give it all, making it difficult for me to force myself away from the crowd to get home in time.

All in all, Sunday night’s show was an excellent start to what would later become a difficult week, providing me with excitement that’s carried up through today. Special thanks to Ryan Getz and Tuned Up, the hosts of the show. Keep an eye on their Facebook page for more upcoming events, including a return to Columbus by up-and-coming pop act Phangs!

Check us out on social media!